Ruby’s In the Night Garden party

Who would have thought Ruby turning two would be here already? Time really does fly. It feels like it was only yesterday when she was born!

There is no doubt what show is her favourite in the whole entire world. She has flipped out over In the Night Garden since she was 6 months old. We have every stuffed toy character, all episodes of the show and even a little wind up ninky nonk! So when it came to deciding on a theme for her 2nd birthday party, I knew exactly what to do.

The invitation was designed using fiverr.com and I was really happy with it. I had it printed on card and stuck a magnet on the back so peeps could stick it on their fridge. The colour scheme was yellow, pink and orange.

I bought these plastic daisy posies at the discount shop and broke them into individuals and stuck them around the lawn.

I picked up some grass looking table clothes from a discount shop so the kids table and the food table had those and I just chucked some pink plastic clothes I had left over from last year’s princess party on the adults tables to go with the colour scheme.

The balloons were fun to make. Just five pink balloons all blown up about the same size and you tie/twist them together than twist in two yellow balloons. Cool tutorial here. Here’s Ruby with her cake. 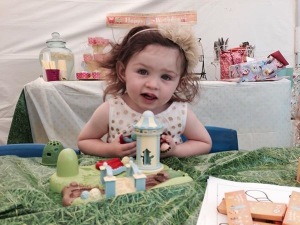 With a mixture of ages from 22 months to 10 years old, I wanted to make sure I catered for all of them.

I bought some long sticks (four of them) of bubbles and taped them around the washing line post so the kids could play with the bubbles but not spill the soap mix everywhere.

Have you ever played pin the blanket on Iggle Piggle? We have! I printed out a big image of Iggle Piggle and taped it to a wall and then cut out small bits of red felt as the blanket.

Would you believe I found a daisy pinata in the colour scheme? That was a lot of fun for the kids!

These balls are amazing and cost $5 each from Big W. They reminded me of the ball that bounces around on the show sometimes and I thought they would be fun for the kids to play with in the yard. 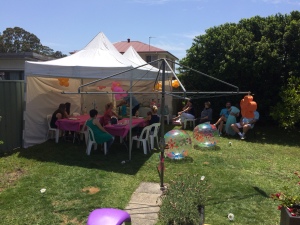 The food was kept simple this year. Last year I spent the entire party in the kitchen making everything from scratch and missed spending time with guests and Ruby. So this year I not only had the help of my friend but we made up a lot of stuff in the morning. There was a caprese salad which was just cherry tomatoes, sliced boccocini, basil and pasta with drizzle of olive oil and balsamic vinegar. Then just a simple potato salad. I bought a stack of marinated chicken portions that we roasted up in the oven and they went like hot cakes. There were mini hot dog sausages in puff pastry, cheese and spinach triangles too. I also made some fruit kebabs and drizzled ice magic over them.

These vanilla cupcakes I am not overly proud of and I really wanted to do fondant icing but ran out of time….but I wanted to show you the rice paper toppers I bought off ebay to go on the cakes. I also made the goodie bags at the rear with little toys along with some In the Night Garden bits I found on ebay. I didn’t put lollies in them because we did a daisy pinata that I filled with 2kgs of lollies so I figured they would be sugared up enough!!

Finally my proudest moment…the cake! So pleased with how this turned out. I used butter cream icing tinted with green and piped it on using a grass/hair tip. I also covered the cake board in a thin layer of the icing so it looked better. The edible daisies were picked up from Aldi. I was going to attempt to make them and the characters using gum paste but the lady in the cake suppliers shop recommended with my zero skill level I should just stick the plastic characters on it! The cake was an amazing (if I do say so myself!) mud cake s when you cut the cake it looked like dirt.

Ruby must have had a good time because after everyone left, I found her out cold on the lounge: So there you have it for another year! I wonder what theme we will go with next year 🙂